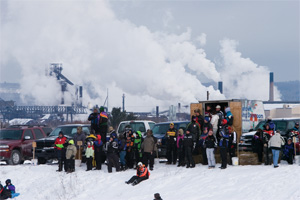 Jesse Leiphart has a problem. The burly 22-year-old is standing with his shoulders hunched and his back into a horizontal snow squall. He’s not wearing a jacket, and there’s a hose stuffed into the front of his pants. The hose runs from a keg that sits beneath a mound of blankets and Mr. Leiphart’s jacket, and a heater chugs in vain to keep the keg’s precious contents in its liquid state on this frigid -5°F February day in Sault Ste. Marie.

“The Bud was getting slushy,” the Lake Superior State University student says apologetically, but with a touch of pride at his Yooper insulation ingenuity.

Leiphart, his keg-carrying pals, and about 6,000 other racing (and drinking) fans have gathered on this barren hillside along I-75 to witness the 39th running of the International 500 Snowmobile Race. Thirty-three teams are competing for nearly $50,000 in winnings as they take on 500 laps of the one-mile oval track. The I-500 is the pinnacle of the Midwest’s indigenous sport of snowmobile racing, and due to a number of accidents the past few years, it has also gained a reputation for danger.

But more on that later—there’s a party going on.

Atop the nearby hill, facing north toward the steaming stacks of pulp mills across the St. Mary’s River in Canada, sit row upon row of race-fan RVs. The metal, mobile city is like an icy Up North Big Easy, a French Quarter of well-traveled Winnebagos and repurposed school buses where I-500 revelers … er, racegoers, congregate around bonfires and free drink offerings.

To get a front row parking spot, fans must arrive a week in advance. That’s what the Taylor boys from the Saginaw area have done for years. They’ve developed their trackside real estate with a hay-bale bunker, a wood-burning mailbox and their almost-famous invention, the Liquor Luge.The men, all engineers, have hoisted a thick slab of ice onto a slanted wooden framework, carved two raceways into its face to accommodate a variety of high-octane intoxicants and now wait at the bottom, mouths open, as the supercooled schnapps glides toward them.

“You have to be careful or your lips will get stuck to it in the morning,” says Doug Taylor, 26. The Taylor family’s affiliation with the race goes back to Ken Taylor, who at 75 is still in attendance, nestled into the bales in front of the crackling mailbox. Mr. Taylor has been bringing his boys, who in turn have brought their boys, to the I-500 ever since he worked as part of a pit crew in the early days of the race. 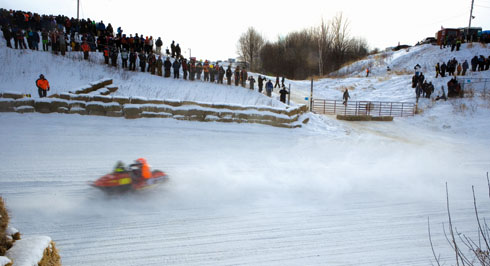 The race has always been a volunteer effort, and these days several committees mesh like gears to drive the I-500 toward race day – always the first Saturday in February. Indeed, the track has the informal feel of a backyard affair, with humble, aging signage, rows of hay bales lining the track as a safety cushion, and local boys’ plow trucks to keep the snow cleared. Nothing fancy, but it works, and this year the race will celebrate its 40th anniversary.

Volunteers work year round on the race. Work starts on the race proper after Thanksgiving, with the main thrust coming after Christmas. Two weeks before the race, the track and grounds are usually ready for racing.

It takes three weeks and 1.8 million gallons of water to make the solid ice track. Three 8,000-gallon tankers transport water from a hydrant in the pits and make many trips around the track. Icing usually takes place from 10 p.m. to 3 a.m. on very cold nights.

Lap counting is done electronically, with each machine having a transponder recorded by an S-shaped wire planted under the track. For 29 years, volunteers manually counted the laps.

Race sleds cost about $30,000 after modifications. It’s estimated that each sled consumes about $1,500 in high performance fuel over the course of the race. Payout for the winning team in 2006 was nearly $20,000, with another $31,000 split between the other top 14 finishing teams.

The legend of the I-500 begins in 1969, when Soo business owners dreamt up a snowmobile version of the famous Indianapolis 500 auto race. Snowmachines were in their infancy, and people weren’t certain even one sled could make it 500 miles, let alone a group of sleds competing for that goal.

The early organizers turned their eyes to a former U.S. Army ammunition dump in a creek bed at the edge of town. After some excavation and demolition of a few concrete bunkers, the one-mile oval was born and the inaugural event scheduled for February 8. Forty-seven sleds qualified, and after 13 hours and 42 minutes, an exhausted Ski-Doo named “Puffer” wheezed across the finish line. Only 26 of the machines finished, and the average speed was 36 mph. The race was so slow fans freely crossed the track between sleds.

Fast-forward to today, when souped-up sleds can average 87 mph and hit 115 mph in the straights. As riders hurtle into the corners, they swing their bodies down and to the left, clinging to the handlebars while leaning completely off the sleds to keep the center of gravity low and maintain contact with the ice track. The left ski often flutters just off the ice track as man and machine battle centrifugal force. Sometimes centrifugal force wins.

Just minutes into today’s race, an Arctic Cat rolls in Turn 1. The rider goes sprawling as the machine upends; its track, armed with more than 200 steel cleats, paws the air. A tether between the rider and the sled kills the engine, but there’s no way to stop the other sleds. Rag-dolling out of the wreckage, the rider kneels on the ice, facing into the oncoming traffic, his hands raised in front of him. The competition zooms past, and he’s able to beat it for the side of the track. Other riders haven’t been so lucky.

In 2003, an insurance salesman from Munising left behind a wife and young son when he fell from his sled and was struck and killed. Riders are required to wear shin guards and other protection – and, in recent years, take Breathalyzer tests – but those regulations mean little when skidding across the ice in front of other speeding machines. The 2004 race saw a sled jump the track and slam into a group of pit crew members. One woman died and two others were severely injured. The carnage overwhelmed the local hospital. With the emergency room full, officials had to call the race after only 174 laps, the shortest and bloodiest event to date.

“Everybody knows this is a race you can get killed at,” says rider Jeff Rydahl, 41, of Greenville, Michigan. While most tracks on the racing circuit are half-milers, the I-500’s large size allows racers to get up to perilous speeds, Rydahl says. The racers, pit crews, media and volunteers all sign waivers. The helpful volunteer who gave me my form at check-in explained it as, “Basically if you lose an arm or die, you are agreeing that you were in the wrong place.”

Inside the heated beer tent it’s shoulder-to-shoulder, why-are-you-touching-me close, as men in camo, Carhartts and neon leathers jostle toward the amber fountains of inebriation. Around the perimeter of the tent, pretty girls hawk things snowmobile guys need, like stickers and racing oil. A local trapper sells hats and gloves, thick with the fur of beaver and coyote.

Meanwhile, Lake Superior is throwing its signature alternating bands of whiteout snow and blinding sunshine at the crowd and track. No one seems to know what lap it is, and they seem genuinely surprised that I care. The bluebird sky over the race turns ominously gray, and a wall of wind-driven snow obliterates the track. The sleds are still screaming through all of it, rapidly draining tanks of rich oil and 110-octane racing fuel. A heady, slightly sweet smell of high-performance exhaust drifts above the track.

Wait, maybe that’s just the hog slow cooking inside a converted fuel oil tank manned by Soo native Don Press. The trackside gourmand cracks open the flat black tank, and a smoky cloud of porcine goodness rolls into the bitter air. Getting ready to feed 40 people today has taken all of Press’s attention, so he’s not sure what lap the race is on, either.

A serious, stone-cold sober Canadian named Steve grudgingly tells me it’s lap 300-something. Even though he’s been watching the whole time – about seven hours at this point – he can’t be sure because there have been a number of caution flags for accidents and weather conditions. The race has exceeded daylight, and the high-powered lights overhead illuminate only blowing snow. The engine noise has subsided, and announcers tell an oblivious crowd that the race is under a red flag as volunteers plow the track and wait for better conditions.

At 10 a.m., when the race first started, the RV hillside was white with fresh snow; now it’s been churned brown underfoot. This morning children slid down the hill in anticipation of the race. Now, a group of adults struggle to climb up to the steaming port-a-potties; one man slips backward, but miraculously maintains an upright Busch Light, to the glee of his comrades. As darkness gathers, fans mill about, some heading for the gate, others returning to the race with plastic sleds restocked with beer.

After a lengthy wait, the loudspeakers crackle to life and the race is called. It’s nearly 7 p.m. and only lap 376. An Alaskan riding a Yamaha has won. Only one rider was severely injured. The cluster of fans in front of me doesn’t seem to notice, as they lean on one another in a sloppy I-love-you-man hug. A clean-cut guy in a spiffy green Arctic Cat jacket chides the oldest of the group, a bleary-eyed Polaris devotee with icicles in his beard, “Hey buddy, if your beer gets warm, just put it in your mustache.”

Aaron Peterson is a writer and photographer based in Chatham, archive.aaronpeterson.net.

This article was first published in February 2008.