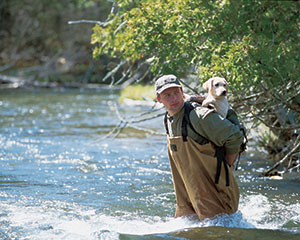 At our age, my wife and I should have been thinking of babies, not Labrador retriever puppies. But, in Nancy’s defense, I’m mostly to blame.

Hunt behind a great bird dog, and you’ll come to want one of your own. The great ones cast that kind of magic over you.

I was lucky enough to own a really fine bird dog already. And if the old saw is true, you’re only granted one in a lifetime. But I longed for another. Admittedly, I’m a fiend. I needed another dog. You see, the junkie in me craves few things more than that warm kick of adrenaline I get when following a dog hell-bent for leather on bird scent.

Belle is the name of a beauty. Fitting, given that Harper—my first dog—is such a beast. And to that end—or beginning, depending on how you look at it—I went looking for a nice, sleepy female, a gentle puppy that would like sitting in my lap and being stroked under the chin. I was granted just such a pup, a little lady, under circumstances clearly divine.

Belle, you see, came from a litter of one.

Friends whom I told would say it just like that. Incredulous.

But always, again: “One puppy!” This time, agog.

Instead of trepidation, I felt giddy at the news. One puppy! And a yellow female at that. It was nothing less than a sign. The magic of it was too much to ignore. Being a mite superstitious, I needed only a short leap to convince myself that this little lady was sent specifically for me, that the fates had spoken, and that already our future together was preordained.

Exactly how Harper would get along with a new puppy was cause for concern. Not that he’s unpredictable or vicious. A typical Labrador, Harper’s a consummate lug and a bit of a pushover at times. Still, everybody can relate a story about the big, dopey, otherwise friendly older dog that resents the attention the new puppy gets, becomes cantankerous, grows reclusive, or suddenly goes nutso one day and sends the pup to the vet. 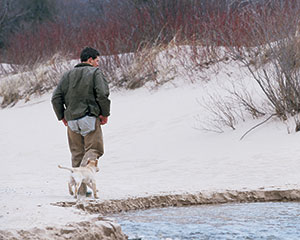 But the only thing that stands out about Belle’s homecoming was how blithely Harper took the whole thing. It was actually a letdown for Nancy and me. One obligatory sniff and he retired to his bed and doggie dreamland, seemingly less miffed by the pup than by our rousting him from visions of greenheads cartwheeling to the water and white bumpers falling from the sky like snow.

He barely raised an eye when Belle sauntered over to him, took up a mouthful of his ear, and chomped down hard enough that Nancy and I both winced.

The pup then went to his tail, momentarily transfixed by its cobralike sway. She took a good hold of that next. Harper yawned and rolled over on his back.

The scene had cast a spell. Belle pawed twice at Harper’s undulating tail, a moment of puppyness both playful and innocent. But then she stepped back as if sizing up the problem and cocked her head quizzically at his underbelly.

In defense of what followed, Nancy would later say that Belle was merely trying to nurse. Yet, I think otherwise. The strike was too quick and most definitely directed at a spot never meant for biting.

Harper snarled and snapped. Every imaged horror flashed before me but was gone faster than it took Belle to yip and jump back. There was no need to admonish Harper and add insult to injury. As for Belle, she was undaunted. She ran a wild, loping circle around the living room—her stumpy, seemingly jointless legs carrying her in a kind of hobbyhorse gait. Then she stopped, squatted rather purposefully, and peed on the middle of the floor.

Northern Michigan. Ours is a particularly snowy country, where 150 inches of powder shower from the heavens half of the year. Up here, you can spend so much time dogged by winter that you begin cursing the season under your breath. Winters up here have personality, even if it is that of an uncouth dinner guest who arrives too early and stays too late.

I consider myself a winter person. But Belle’s first year found me lusting for signs of spring. The season never kicks off precisely on the day the ?calendar says it should. In fact, most of April allowed little satisfaction. No showers. No flowers. Gray skies and every day more snow blowing down from the North, over the big water. 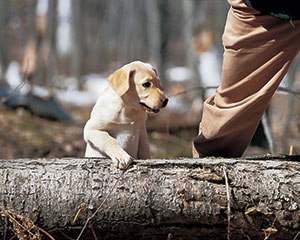 As I had with Harper, I shoveled out a toilet space in the backyard and borrowed a phrase from one of my training books. “Hurry up. Hurry up,” became the mantra for Belle doing her thing. Beyond these potty breaks and intervals of playtime throughout the day, Belle spent most of her time in the kennel. Accidents in the house were rare, and when they happened, simply catching her in the act and firmly chiding her was enough to bring on the most defeated, sad-eyed look she could muster.

Unlike Harper, who initially abhorred “the box,” loathed it as if the crate were some canine-torture apparatus, Belle first took to the crate training with complete indifference.

But her tolerance for it wasted away with the snow, which by month’s end was lying in dirty piles, rotting in the shade. Belle’s world grew larger by the day. The wind shifted from north to south, and with it came a warm breeze that smelled of mud and earth. Like cathedral light through stained glass, shafts of orange pierced the gray snow clouds and ran the guts of winter through.

Winter holds on so long here, you can forget what the world looks like without snow. You think you remember, but the memory is dull—and just how fuzzy the vision is becomes clear when you finally see bare earth again. Green grass! It tickles your insides, makes you giddy. Makes you smile.

To a puppy born in winter, the smells that come up from the ground must simply overwhelm. To my crippled senses, spring air is simply dank and fog-heavy, thick and sometimes hard to breathe. With the land and water and everything that crawls and swims so long frozen beneath the ice and snow, oxygen deprived, it’s as if they are gasping for air all at once. Even with that feeling, which to me is distinctly spring, I was waiting for something more definitive.

After weeks of blessed silence and uninterrupted sleep, Belle became fed up with the kennel one night, waking on a half-dozen occasions, yipping and yowling to escape her confines. A sucker for the ruse, I rose every time.

But in the backyard, her business was fast forgotten. I stood there groggy, stiff-legged, and sore-backed while she snorkeled around my feet. More new smells. Night smells. Another dog barked as I tried hurrying the process along. 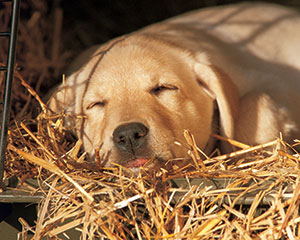 But it wasn’t a dog I heard. It was geese, what were soon dozens—?perhaps a hundred—honking to one another in staggered lines just over the trees. They appeared as silhouettes in the night sky, moon shadows flecked by the stars. The hullabaloo was such that even Belle stopped with the sniffing and gazed skyward.

“Whatta ya think of that, Belle?” I asked when the sound of their passing died away. But she was already back nosing at the ground.

I turned the way the geese had flown, straining in the quiet to hear them and imagining for a moment that I could. I remembered what Aldo Leopold said, “One swallow does not make a summer, but one skein of geese, cleaving the murk of a March thaw, is the spring.” When I looked back at Belle, she was merrily gnawing on a pinecone, lost in a moment of her own.

As tentative as she seems, Belle took to the water without a lick of coercion. But then again, introducing a Labrador retriever to water is a lot like teaching a bird to fly. Once again, in matters of instinct, it’s always best that we humans not muck things up by getting too much in the way.

Nancy and I like walking the beach in the evenings. We take both Harper and Belle on those outings, where the dogs run the shoreline unfettered by either leads or commands. When she tires of chasing Harper, Belle likes ?digging in the slick, wet sand where the waves roll up and fall back, leaving crooked, white, frothy lines like snail trials. Plump as a shoat and happily involved in the business of digging, Belle is not always quick or agile enough to dodge the breaking waves. Lake Michigan has given her more than one soaking over the months, but like a duck she lets the water roll off her back.

We’ve taken regular forays into some of my favorite covers. There the grouse are drumming. When I find their dust bowls on the wooded two-tracks, I hunker down until Belle sidles over to give them a smell. She feigns interest, snorkeling in the grit, then bounds off into the bushes, seeking out other smells.

On the two-tracks we cross every mud puddle. Belle quickly graduates to negotiating small streams as deep as her knotty knees. To a little pup that wants to be with you, these obstacles seem no different than a fallen tree across the trail. Belle is compelled by the need to follow. 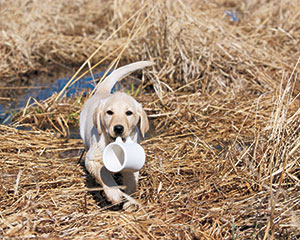 For her first “official” swim, I choose a shady oxbow on the Platte River that I found in spring while fishing, stalking the grassy riverbanks looking for rising trout. An old beaver dam blocks the lower end, a place I was able to raise a few small browns. Above it, the current runs slack. The water, waist deep, is warm in the sun, the channel so narrow one could easily toss a stone across it.

I find a place to cross, a gentle slope. Belle has only a moment of uncertainty, a fit of puppy splashing when the sandy river bottom vanishes beneath her feet. Along with words of encouragement, I offer her favorite crud-caked canvas bumper, tossing it into the water in front of her. And with that, the floundering ceases. The retrieve, though not exactly textbook, is cause for grand celebration.

For more than 30 years the staff at Traverse Magazine has written about the history and natural world of our region. For the web series, Traverse Classics, we’ve reached into our archives to bring our favorites to our MyNorth.com audience. Get the best of Northern Michigan delivered to your door each month with Traverse, Northern Michigan’s Magazine. Subscribe today!