Waiting For The Mail, the Start of Rural Free Delivery in Northern Michigan 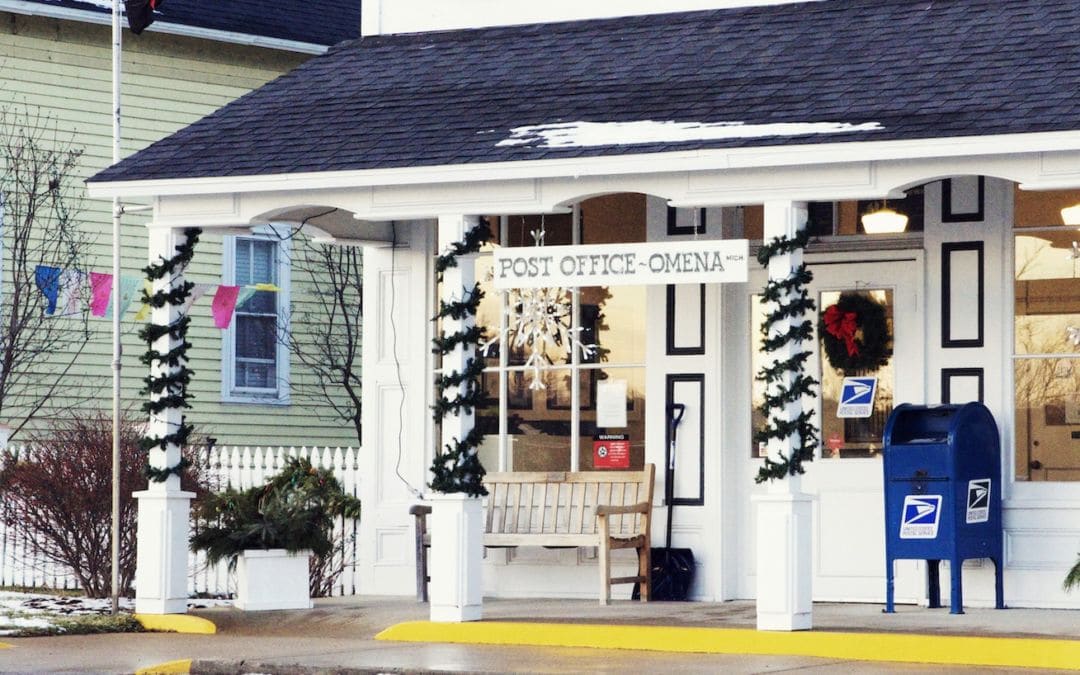 Sunday drivers, tourists and city-dwellers rarely take notice of mailboxes standing along mile after mile of Northern Michigan’s rural roads; nor do they ponder just how and when these metal sentinels first stood guard. Yet, it wasn’t so long ago that these common, though curious, landmarks first began to appear and brought a remarkable change to how country life was lived.

Before 1900, a small, efficient army of contracted carriers moved the mail over “star routes”—named because Post Office Department ledgers indicated roads through remote areas with a simple asterisk. Through forested, two-track, mud-and-manure trails, carriers transported letters and packages from railroad drop off centers to hundreds of tiny country store post offices scattered across the Northern Michigan hinterland. And farm families were forced to travel—in some cases five miles or more—to the tiny fourth-class offices to pick up their mail. The routine hadn’t changed much since colonial times.

Typically, folks living in our rural Northern Michigan made the sometimes-difficult journey into town two or three times each month. But, no matter how often, they were generally disappointed with the results. As one editor of the times remarked, about all a person got for his or her trouble was “one letter from the old folks, one letter from John, one notice of interest on the mortgage falling due, three steam threshing-machine pamphlets, and some sample leaves from the Farmers’ Guide to Hygiene and Politics, in twenty-four parts.”

But as the new century dawned, it was all about to change. On March 13, 1900, Calhoun County (Battle Creek) began serving a 28-mile mail delivery route, the first of its kind in Michigan. Not to be left at the starting gate, Northern Michigan counties began clamoring for mail delivery service of their own. During the spring of 1904, patrons near Manton, in Wexford County, circulated petitions, as did those living near Petoskey, East Jordan, and Grayling. Soon, the entire countryside bustled with newly appointed postal inspectors riding up and down dusty roads, asking questions, querying strangers for directions, and drawing roads, bridges, streams, houses, churches, and country schoolhouses as they laid out rural free delivery routes. Just as abruptly, tin and galvanized steel mailboxes began popping up, clamped precisely 4 feet off the ground to telephone poles and rough-cut cedar posts.

Then, a new public servant—the rural mailman—climbed into his red painted wagon to make daily deliveries to farmers’ front gates. Service in a few rural Northern Michigan areas began in February of 1905, but only to those folks who had an ambitious politician living among them. Representatives and senators scrambled to appease their petitioning constituents, realizing that adding a single rural mail route could earn them perhaps 100 votes. All over Northern Michigan, such campaign promises were made and fulfilled prior to the elections of 1906. By the end of the decade, more than 3,100 rural free delivery routes interlaced the state. Among all states, only Illinois and Ohio could boast more.

Though newly appointed mail carriers were not required to cross water-filled ditches, travel over washed-out roads, or climb steep hills, almost every one of them tackled such obstacles for a mere two-cent stamp. They gallantly persuaded their horses to drag mail wagons through hub-deep clay, sand, and muck common in spring and summer. During the frigid late fall and winter months, both man and beast alike felt the biting blasts that swept across Canada and the Upper Peninsula. Not wanting to brave the elements unprotected, some inventive mailmen built shelters on their wagons covering both themselves and their equine comrades, though frostbite occasionally damaged postmen’s hands and feet and horses’ hooves and flanks.

Rural carriers trudged through difficult terrain and weather without much complaint, but one aspect of their job would prove too much for even the most resolute to bear. The increasingly common habit of customers placing two Indian head pennies inside the mailbox for postage forced mail carriers to fumble around, shift the neatly stacked mail in the wagon, take off their gloves in the winter, and reach into the dark and cavernous mailbox in search of the tiny coins. A few mailmen were even heard to mutter blue words once in a while. In 1910, Michigan lawmakers heard the postmen’s plea and passed laws prohibiting the frustrating practice of tossing coins into the mailbox.

At the inception of the rural free delivery system, no one could have foreseen the vast impact that it would have on Northern Michigan residents. Still, one perceptive journalist had speculated on the matter as early as 1903:

“The invention of the harvester produced a revolution in agriculture. The establishment of rural free delivery, however, may cause a transformation of far more significance, for it means a social revolution which will enlighten the farm home, making its life more than the isolated existence which thousands of families are compelled of necessity to endure.”

And so rural free delivery brought change, change in ways never before imagined. It brought a flood of mail to rural homesteads, and put families in daily communication with the outside world. Rural free delivery raised land values. Rural free delivery supported, both directly and indirectly, numerous Progressive Party reforms and inspired schemes like “parcel post” and the “farm-to-table” effort. And more than even the invention of the horseless carriage, it became the backbone of the “good roads” movement.

Yet, unexpected complications also occurred. As new rural routes were established and expanded, country-store post offices began to disappear. Since farmers no longer needed to drive into town to pick up their mail, they stopped congregating so much at shops, and storekeepers noted a sharp reduction in their business. It wasn’t long before stores began closing their doors for lack of business, and staples, cloth, and other goods could only be found in larger communities such as Traverse City, Kalkaska, and Mancelona. As distances to secure such items became increasingly greater for Northern Michigan families, ironically, farmers spent longer, more grueling hours on the roadways.

Rural store owners could now see the handwriting on the wall. In fear and anguish of losing his three-generation family business, one dispatched a handwritten plea to the U.S. Post Office Department almost begging for clemency:

“I am postmaster of this place, and they are going to have rural free delivery come within one-eighth of a mile of this office and take away all its business. To take the office away takes part of my living away from me. I have a wife and two children … I beg you for some kind of appointment. I am not ‘choicy’—any place in the mail service of the United States.”

But, alas, it was too late for his family store and many like it. Soon, all country-store, fourth-class post offices would be placed under the control of the Civil Service. Colorful place names long familiar to early 20th-century residents began to vanish from Northern Michigan maps. Gone were Floodwood, Pleasant­ville, Slab Town, Pig-Toe, Fordtown, Po­dunk, Hardwood, Maple Grove, Spider, Boardman Dam, Clam River, North Chi­cago, Rose Town, Johnson’s Crossroads, Hermandale, and Big Twin. Some had been the colloquial names given to one-room schoolhouse districts, others had been county trading centers, and still others had simply identified a small slice of a township that many called home.

Nevertheless, for most Northern Michigan farm families, rural free delivery would prove to be a godsend. Activists used the service to stir local and national debates—debates which helped force consumer protections, Prohibition, and women’s right to vote. And each bundle of letters that arrived in the dented metal box relieved the isolation, solitude, and loneliness of rural life. Not surprising, then, that even during the ascent of the horseless carriage, widespread newspaper distribution, and the static-filled radio, one pleased farm wife wrote:

“Of all good things of country life, I love best the delivery of the mail … Each morning as I look out on the new day, my eye seeks out the mailbox, and I wonder what the carrier will bring us. From that time on, my mind and heart are filled with anticipation. My housework gets finished more easily and with more zest in order that I may be free to enjoy the mail when it comes—letters from kinfolk and friends bringing news of pleasant events, or letting us know how distant loved ones are faring … Another thing about the free delivery: it never really disappoints you. Even when there are no letters, there is always the daily paper, telling us the happenings of our community as well as those of the nation and the world. Let me say, ‘Thank God and Government for rural free delivery.'”