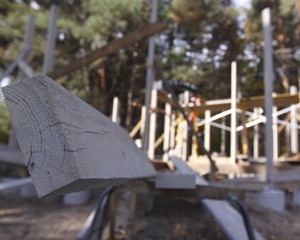 Father Jim was faced with a decision when he took the job as Reverend at St. Michael’s Lutheran Church two years ago: What to do with the old convent school building?  “There was no way we could afford to modernize the building,” the Reverend stated, “Our intent was to salvage whatever good that was in the building, especially the historic timbers.”  Father Jim stressed that, “Green purposes were our major concern.”

Built in 1899, the convent first served as a Dominican Sisters’ Residence and continued to house nuns until 1968 when the school was closed and later reopened as an outreach ministry, predominately for Hispanic migrant workers living in Leelanau County.  In 2000 the ministry was closed, but church employees continued using the space for additional office room.  However, when prolonged exposure in the building resulted in sickness from large amounts of hidden mold and asbestos, the schoolhouse was deemed unsafe and closed forever.

After the decision to tear the building down was made, the Sutton’s Bay community bought up many of the materials.  Then Odom came in.  “We are very grateful for the work Odom did,” Father Jim says.

Set on building green, the Trumbull family, living less than a half-mile down the road from St. Michael’s, contacted Odom and purchased bundles of the lumber as well as the whole framing package with hopes of a new house, writer’s studio, bird observation tower and a garage built entirely with the recycled historic timber.  “We’re trying to cut down on our carbon footprint,” says Valerie Trumbull of the couple’s decision to use reclaimed lumber.

The bell tower traveled the short distance to the Trumbull’s where it now overlooks a pond as a bird observation tower on the scenic Leelanau property.  Trumbull expects the planted native grass, little bluestem, to, “attract local insects, which will in turn attract local birds,” turning the couple’s backyard into a bird watching Eden.

Tom Hirsch, the project’s builder, was recommended by Odom and specializes in eco-friendly construction.  “Green has been my focus,” Hirsch said, “Not just reusable lumber, but many things.”  Hirsch expects the new house to be finished by next summer.

Some materials, such as the foundation stones and the old bell from the convent school building, will be reused in the planned expansion of the St. Michael’s Church.  Most of the historic structure, however, will find a new home down the road in a local writer’s studio, where the next chapter of this century-old story will be written.